Spring is here, and it's time to freshen up my top 25 dancefloor hits for the season. As usual, the roster contains a mixture of my preferred hip hop, dance, pop and electronica jams. Many are new, but several "classics in rotation" grace the list. The year is still young, and I will be curious to see who produces the hot tracks for summer.

Here goes, sorted by song name in alphabetical order. Keep in mind, this list is for general audiences in a mobile DJ setting! 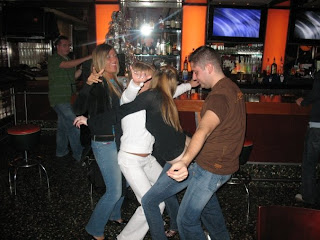 Posted by Gregg_AmbientDJ at 10:17 PM No comments:

I had the pleasure of dining with Bill Calisanti earlier this week. Bill is a singer based out of West Orange, NJ who performs under the stage name "Billy Cal." His specialty is the sounds of the 40s, 50s and 60s. Bill left me with a demo, and I particularly enjoyed his songs from the Doo-Wop era, such as the Duprees' "You Belong to Me."

Bill is available for weddings (either solo or in tandem with a band/DJ), bar/restaurant performances and an array of private affairs. He is also passionate about performing in retirement homes/assisted living facilities, where he enjoys bringing smiles to the residents, particularly to Alzheimer's patients.

For further information, visit Billy Cal on the worldwide web at www.billycalsings.com, or e-mail him at bcal1949@yahoo.com. For those couples booking Ambient DJ for their wedding, consider adding Billy Cal for a cocktail hour, dinner or open dancing set. 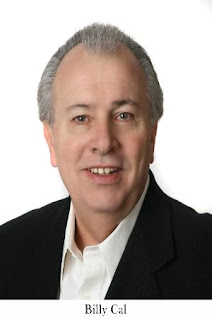 Posted by Gregg_AmbientDJ at 2:29 PM No comments:

Ambient DJ kicked off its 2010 wedding season with a great one! After one of the most treacherous winters on record, the wedding couple, Lisa and Jordan, were rewarded with an idyllic day! Clear blue skies and comfortable 70 degree weather on March 19, 2010. Had their wedding been held last weekend, it would have been a cold, rainy affair. Had it been three weekends ago, it would have been in the midst of a blizzard. This pleasant turn of events could not have happened to a nicer couple!

The historic Smithville Inn is located not far from Atlantic City, off Exit 48 on the Garden State Parkway. I had not been back to Smithville since my childhood years. The venue had a rustic, country feel, with white brick walls, dark hardwood floors and wooden beams. The view out the windows was of a picturesque lake. Outdoors, exotic mallards strolled about.

Ambient DJ provided ceremony music in a separate room. The bride opted to walk in to Pachelbel's Canon in D, a classic choice. The recessional song was Ray LaMontagne's "You are the Best Thing." Cocktail hour was in the same room as the ceremony, and I unveiled my 2010 cocktail hour selections, featuring a mix of mainstream jazz, soul, rock and lush electronica.

For the main event, a crowd of slightly less than 100 settled into the cozy banquet hall. The DJ table was situated at the back center of the room, immediately in front of white brick wall. I set up four par cans in purple, to match the color scheme, and provided uplighting, projecting lighting up the wall and transforming the ambience. Later in the evening, I tried different colors and had the cans running on slow auto-fade programs.

Some notable unusual happenings - the Father of the Bride's speech was particularly long and controversial! The Father of the Groom invited to show me around Germany on my next trip there (the parents of the groom are expatriates).

Shout-out to Laura Perry from Laura Leigh photo for providing some of the photos below. You can visit her on the worldwide web at www.lauraleighphoto.com. 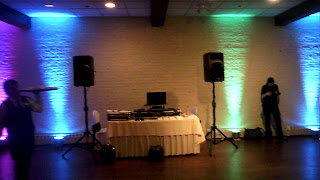 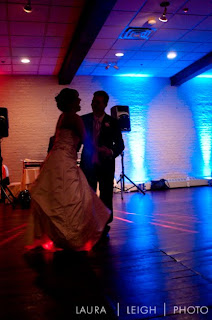 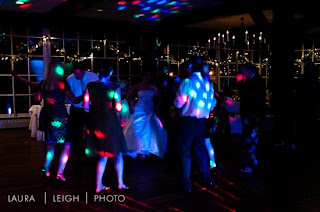 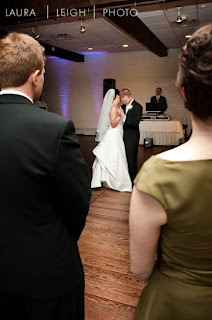 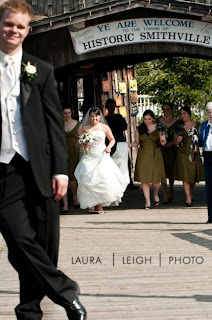 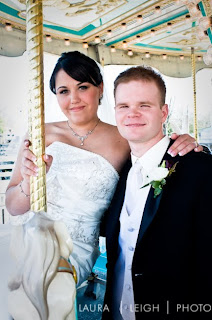 Posted by Gregg_AmbientDJ at 8:16 PM No comments:

Wedding season is upon us. I have been conducting planning meetings with numerous clients for their upcoming April-June weddings. The season kicks off this Friday night with Jordan and Lisa's celebration at the Smithville Inn.

Sometimes clients select specific songs for their cocktail hour, or they may specify jazz, soft rock, electronica, or a mixture. Left to my own devices, I enjoy programming a variety of genres, with a gradual energy build-up. Another key goal is that the cocktail hour should feature great music, and not sound like a soft rock mix from the dentist's office.

When guests enter the cocktail hour, I like to have elegant, atmospheric jazz playing at a soft volume. Music for cocktail hour is used to "set the mood." Preferably, these initial songs should have an uplifting theme - after all, this is a wedding! Thereafter, I like to venture out into R&B/Soul, 70s rock, and internationally with Brazilian and Latin America some of my favorite stops! My personal preference is to save crooners such as Sinatra for dinner music. By the end of the cocktail hour, the tempo and volume are up, and hopefully guests are in a great mood - both from their engaging conversations and a gin & tonic or two!

Another key tenet in my DJing is to "keep it fresh." From year to year, I like to start my playlists from scratch to avoid getting trapped in a routine. Sure, a wedding DJ could largely get by using the same formulas party after party. For both musical and personal growth, I feel that it's critical to keep Ambient's playlists fresher than a Parisian baguette. Even if I decided that Michael Buble is an artist who should be on my playlist again in 2010, why not try a new song from his catalog rather than the same old?

Here are my picks for cocktail hour 2010 with commentary where appropriate:

1) The Shadow of Your Smile - Ron Carter (Bassist Ron Carter is a titan who's played with the legends of jazz. This trio arrangement of a jazz standard sets a great atmosphere with Carter's warm bass).
2) I Hear a Rhapsody - Dave Brubeck Quartet
3) The Look of Love - Dusty Springfield
4) Your Love is King - Sade (I would have loved to put a song from her new album on, but Soldier of Love is too dark, and the rest of the album on the mellow side)
5) Here I Am, Come and Take Me - Al Green
6) Baby, I Need Your Loving - The Four Tops
7) You'll Never Find a Love Like Mine - Lou Rawls
8) Haven't Met You Yet - Michael Buble (Canadian Buble put on a great performance of this song at the Winter Olympics closing ceremony; the song is making our playlists, even for teens!)
9) Please Read the Letter - Robert Plant and Allison Krauss - this unlikely duo sounds great together, and could appease country and classic rock fans in one full swoop!
10) Tiny Dancer - Elton John. Until recently, I had never known that Elton was the top-selling artist of the Seventies.
11) Heart to Heart - Kenny Loggins. This song is in an interesting key, and Loggins' falsetto can get inside your head!
12) The Best of My Love - The Eagles.
13) Desafinado - George Michael & Astrud Gilberto (this song pairs two of my favorite artists).
14) The Boy from Ipanema - Crystal Waters (that's not a typo - this song is upbeat with a Brazilian carnival vibe with the familiar Boy from Ipanema melody)
15) Give Me the Night - George Benson
16) Say Hey, I Love You - Michael Franti (this is currently a hot song.... I save it for towards the end given the brisk tempo and fact that it sounds better loud)
17) Deeper (Soulfuric Vocal Mix) - Groove Junkies - an upbeat Brazilian-infused production that sets the mood for the party that is to follow!. 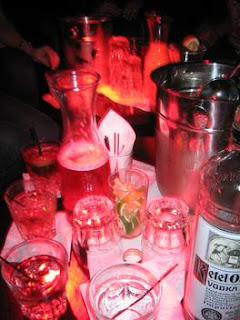 DJ Spinz is performing at a house party on Prospect Avenue in Princeton tonight. This dinner club features tall dark wood walls, ideal for uplighting. The video below shows Spinzy warming up, and a pan of the room. Hopefully the guests come out to party!

Posted by Gregg_AmbientDJ at 10:05 PM No comments:

Ambient DJ Service is a full-service music and entertainment company based in Central, NJ and covering the Tri-State area. Specializing in weddings, corporate events and sensational dance parties, let Ambient DJ's mixologists help take your party to the next level!

To learn more, visit us on the web at http://www.ambientdj.com.
Posted by Gregg_AmbientDJ at 5:11 PM No comments: