Protecting a DJ Company's Assets - Is Crime on the Rise?

When the economy declines, crime tends to rise.  In the past week, three of Ambient's DJs have been on the bad end of a crime.  Our company is not based in a particularly dangerous area.
1) DJ Chris' hard drive was swiped at a performance while he ran some gear out to his car.  For the full story, read the attached article from the DJ Times blog:
http://djtimes.com/djt/blog/2011/03/can-amazons-cloud-player-save-you-big-hurt/


2) One of our performers who also owns his own mobile DJ company became aware of a ruse.  He believes that a con artist found his company on Youtube and identified that his DJ company performed at a prom in 2010 for a local high school.  The con artist sent a letter and contract to the high school in early 2011, seeking to renew the prom contract.  Payment was to be sent to a P.O. Box in California.  Regrettably, the school fell for the trick and mailed out payment to this non-existent company;
3) Another DJ of ours received cash for his performance, but when going to deposit the money at a local bank, learned that the payment included a counterfeit $50 bill!
MORE BAD STORIES FROM THE FIELD


In a separate incident, we booked a bar mitzvah for a family who had been de-frauded by a purported "national DJ company" based out of Chicago and having a professional staff in New Jersey.  The family diligently mailed in their contract and the entire fee, only to later learn that the company had disconnected its phone and was nowhere to be found!
In a final incident, an LED par can mysteriously disappeared while loading out from a wedding.  When calling the banquet hall to see if the light had been left behind, there was no trace.

TIPS FOR PREVENTING LOSSES
It may be wishful thinking to think that these are isolated incidents or a string of bad luck.  Listed below are ten tips for securing your assets.
1) Work with a buddy when possible.  Two sets of eyes are better than one.  Always bring an assistant when working in the city.  Be aware of your environment and the people around you;

2) Park in a well-lit area that is visible from the building, where a thief may be less willing to risk being caught in the act;

4) If leaving the DJ booth, ask a trusted guest to keep an eye on your gear;

5) Beware of guests with drinks in their hands near your valuable DJ equipment (even if they are pretty ladies!);

6) Don't leave your gear inside your vehicle overnight if not parked in a locked garage;

7) If you are a digital DJ, then back up your music collection regularly, also keeping one backup drive at a remote location (in the event of a theft or fire at your primary residence);

8) Consider insuring your equipment against loss, damage or theft;

9) Label all of your equipment, so that in the event that it is left behind at a gig, the finder can easily contact you and is less tempted to keep the item.  For our laptops, we also mention a "reward" if returned as an additional incentive towards honesty; and

10) Loading out from a gig late at night when you may be physically fatigued, resist the temptation for a sloppy load-out where gear is roughly handled or not packed properly; or you don't lock the vehicle in between trips.  Also, don't forget to lift with your legs (and not with your back!) at the end of a long gig, a back injury can haunt you for a long time! 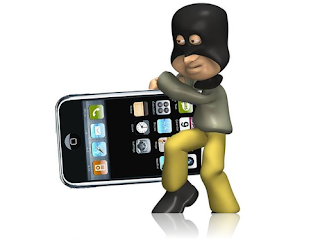 What other security tips would you recommend?
Posted by Gregg_AmbientDJ at 11:10 PM