On Sunday afternoon, I received a phone call from a Captain at Fort Dix who as an afterthought, was seeking to add a DJ to a Memorial Day picnic/BBQ party at the base.  This party was being termed a "sendoff party," as he and his unit are being deployed to Afghanistan in June.  As a token of goodwill to the men and women serving our country, I offered a 50% discount.  I also knew that this would be an enjoyable event; that is, spending time with our soldiers on Memorial Day.
Fort Dix/McGuire Air Force Base is a massive complex.  I have gotten lost driving around the base in the past, so took great care to arrive early and have all of my paperwork in order.  Enroute, the Captain called to inform me that the party was starting at 3 PM, not 4 PM as he had originally believed.  While I arrived to the first checkpoint at 2:45 PM, I was denied access and asked to visit the Fort Dix Visitors Center.  Unfortunately this center was closed, and I was also denied access at the accompany checkpoint.  My next stop (erroneously) was at a commercial vehicle entrance that sweeps your vehicle for explosives. I was similarly denied access through this checkpoint!  Finally, I was sent to the McGuire base Visitors Center which was open. My name was not on file, so one of the sergeants had to physically visit the center and authorize me in.  We then made the long drive on-base to the picnic area.  I marveled at the massive scope of this complex/community. Needless to say, my set did not begin until about 4 PM, but these security measures were outside of my control and there were no hard feelings.
The picnic area near Doughboy Field was in full-swing with activity.  Soldiers playing basketball, volleyball and softball, riding go-karts, competing in tug-of-war contests, attempting to sink an officer in a dunk tank, and enjoying a delicious spread of barbecued items.  The guests were active, generally young, and in great physical condition. 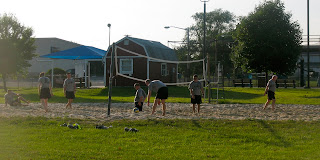 On the music side, I started with my laid-back summer party set, before increasing the beats-per-minute later on.  Throughout, I made it a point to invite requests.  These requests reflected the diversity of the soldiers, who hailed from various parts of the country and from different ethnic backgrounds.  While I may not have been able to totally satisfy the Tennessee and South Georgia contingents, artists such as Hank Willams, Jr., Johnny Cash, Alan Jackson and Garth Brooks provided suitable alternatives.  The weather was warm and picture-perfect, like a summer barbecue should be!  The guests were very cordial, and it was refreshing to be addressed as "Sir" and not "Hey DJ!" :-)
While packing up later on, I enjoyed a nice conversation with one of the sergeants about the soldier's life in Afghanistan.  The upcoming tour will be his fourth.
Key Tracks:
Is This Love - Bob Marley
Summertime - Shaggy
Set it Off - Strafe
If Heaven Ain't a Lot Like Dixie - Hank Williams, Jr.
Ghost Riders in the Sky - Johnny Cash
The Cupid Shuffle - Cupid
Run the World (Girls) - Beyonce
Straight Out of Line - Godsmack
Born Free - Kid Rock
God Bless the U.S.A. - Lee Greenwood
Happy Memorial Day to all Americans, and God Bless America!
Posted by Gregg_AmbientDJ at 9:00 AM