In a given year, I perform at up to 100 parties. What does it take to get into the Top 10? Great guests, heavy dancefloor action and a spectacular or exotic venue are some of the key ingredients. It was actually difficult this year to limit the list to ten parties.

In countdown fashion, here are my top ten parties of 2009:

10) Fitzgerald Wedding, The Taylor-Butler House, Matawan, NJ - This wedding occurred in late February in the historic Taylor-Butler House, a two-storey Victorian mansion built in 1853 by a wealthy China merchant. Scott and Theresa were a great couple to work with. The planning process was detailed, given some of the physical characteristics of this historic property. I entertained an enthusiastic dance crowd in the backdrop of an era long gone. The evening was only slightly sullied by a drunken punch-up on the front lawn after the event.

9) Princeton University, Cap and Gown End of Year Dance Party - Make no mistake, the students of Princeton party as hard as they study. At this end-of-the-school year video dance party, I primarily spun hip hop music in a dark, wooded library, to a large, amped-up crowd. Thanks to Graham Power from East Coast Entertainment for lining up this job.

8) Adule Wedding, Wayne, NJ - This reception was memorable for the enthusiastic dance floor action, extended dancehall reggae sets and potent Haitian music selections by the likes of Sweet Mickey. I am quite fond of reggae music, but for most wedding receptions, rarely have the opportunity to dig very deep - this reception was the exception. As aside, on my list of 40 goals before age 40 ("40 before 40"), I am hoping to vacation in Jamaica.

7) Sandy Hook Wedding, Fort Hancock - On a beautiful summer afternoon, a Navy pilot married an animal trainer who works at Sea World. The ceremony occurred on a small beach on Sandy Hook. The reception party was in the adjacent Fort Hancock Chapel. The groom prepared an unforgettable animated video slide show presentation illustrating their endearing love story that had spanned many years and locales. At cocktail hour, I asked the Best Man (also a pilot and dressed in uniform) if it would be OK to play a Top Gun selection... he lightly discouraged it. Still, later in the party, I dropped in Highway to the Danger Zone to great reaction!

6) Keane Wedding, Crystal Point, Pt. Pleasant, NJ - It was a treat to DJ my friends' Chris and Laura's wedding reception near my hometown, among many of my good friends. DJ Spinz pitched in on the tag team, and after dinner, tricked the guests into a massive conga line! Later on, guest Nutty Esquire rocked the mic to the House of Pain's Jump Around. Definitely fast times on the Jersey Shore!

5) 80s Night - Tavern on the Lake, Hightstown, NJ - In this Relatainment event, I worked in a tag team with with DJ Iron Mike (dressed as DMC), while I donned a white linen suit and lavender shirt, DJing as Sonny Crockett from Miami Vice. The combination of fashion, 80s music videos on the 90 inch screen, along with clusters of enthusiastic 80s afficionados made this a party to remember! Props to Rel Relatainment for organizing this bodacious event.

4) Cooper Wedding, Caffe Aldo Lamberti, Cherry Hill, NJ - Ben and Georgiana (a former gymnast on the Romanian national team) wed on a Sunday afternoon at the trendy Caffe Aldo Lamberti (I would love to return there for lunch or dinner for the amazing food and ambience!). Sunday receptions can be hit-or-miss, but this was event was a stone cold winner. Highlights included salsa performances by two energetic guests (calling themselves The Two White Guys translated in Spanish) and a guest who did a dead-on Mick Jagger impression! The bride and groom, family and friends were all great to work with.

3) Rosenbach Wedding - McLoone's, Long Branch, NJ - this late May wedding featured a beach ceremony, followed by a reception upstairs with beautiful ocean views and open windows to the fresh sea breezes. This new and upcoming area of Long Branch was hopping - the weather was pleasant and there were many people sunbathing on the beach and walking the boards. The ceremony occurred in a roped-off beach area, but surrounded by the beach crowds, boardwalk observers and scents of coconut oil! Dan and Stacey, who love music, put great thought into creating their playlists, contributing to a frenzied dancefloor after dinner. Memorable touches included a surprise first dance (morphing into It Takes Two - Rob Base) and ice cream couriered in from Thomas Sweets in Princeton.

2) Bloomberg Corporate Party - Ambient DJ was engaged by Eggsotic Events, to provide music and sound reinforcement for Bloomberg's Skillman campus, which has hundreds of employees. Egils Matisse and his wife Shelley from Eggsotic Events transformed the venue into a magical Brazilian rainforest. DJ Spinz and I provided the music to compliment the theme. In particular, I enjoyed mixing Brazilian-themed electronic dance music by the likes of Bobby Brazil, Martin Denny and the Groove Junkies. The technical staff at Bloomberg/Aramark were great guys to work with, and helped us navigate the technical and logistical challenges.

1) Rose Wedding - The Berkeley Hotel, Asbury Park, NJ - DJ Spinz and I tag-teamed this event, providing ceremony music, cocktail music and entertainment for the main event in the restored and majestic Berkely Hotel. I grew up on the Jersey Shore (Manasquan), so there was a sense of nostalgia in performing here. Despite an unforgettable odor for the dumpster area load-in and a walk through Freddie Krueger's basement, the reception itself was amazing and we were commissioned for an hour of overtime. John and Alix (the newlyweds) are awesome people and were fun to work with! The peak hour dancefloor, to a frenzied crowd, featured the Boss' "Rosalita" and 90s jams such as "The Humpty Dance" and "Jump Around" (to which DJ Spinz stood up on the subwoofer and hyped up the crowd!).

I had a great time DJing in 2009, and look forward to more unforgettable parties in 2010. 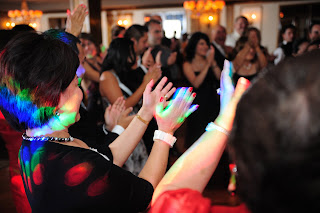 > Photo above courtesy of Wendy G Photography (www.wendygphoto.com)
Posted by Gregg_AmbientDJ at 8:54 AM