This evening, Ambient DJ had the pleasure of providing music and audio-visual services for the Bloomberg's Skillman, NJ campus at its annual Employee Awards event. This was our second year working the event. Whereas last year's theme was the Rainforest, this year's theme was beach and boardwalk.

1) The auditorium, where the Awards ceremony was held. Specifically, we provided sound inside the auditorium, as well as a satellite speaker for the office area outside of the auditorium. In addition to providing wireless mics for the three presenters, we played theme-based songs as winners were announced;

2) Cafeteria. DJ Spinz had a dedicated DJ booth where he spun a variety of beach-themed music, and well as his dancefloor staples! It was hard for Chris to concentrate with the nearby food stations full of fragrant high-end seafood!

3) Main stage under the tent - Egils built a marvelous stage and backdrop, where I set up my DJ booth. I backlit my Facied facade with alternating blue and green Chauvet Rain 56 LED par cans. Surf videos featuring big wave riding in exotic locales were run on a big screen using rear projection. To the dancefoor itself, I applied the American DJ H20 effect, producing a shimmering aquatic surface. Throughout the evening, I spun a mixure of Beach Boys, Dick Dale, Springsteen, reggae, soca, calypso and steel drums.. followed by contemporay pop and club artists such as Rihanna and Lady Gaga for dancing. The hottest dance set of the evening was a Latin set, which even drew some of the service staff to the floor!

Importantly, the high-profile Awards show flowed smoothly, with no glitches. Bloomberg's employees enjoyed the pursuant party action. I spontaneously added an Employee Award for Best Dancer, which went to Mr. Don Huff, who was the first to hit the dancefloor and the last to leave! 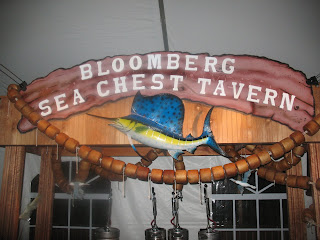 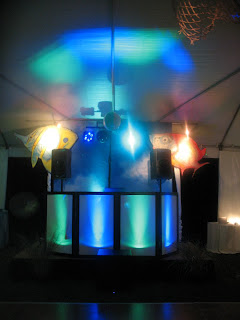 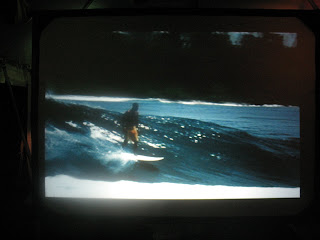 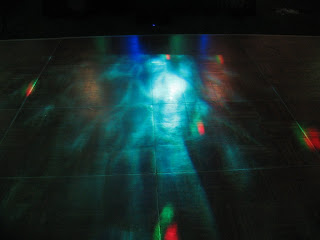 Posted by Gregg_AmbientDJ at 10:53 PM