Tony Bennett is an all-time favorite vocalist of ours.  He is cool, classy and still singing well at the age of 84!  Another plus, Bennett also is an avid tennis player and a fixture in the crowd each year at the U.S. Open in New York City. 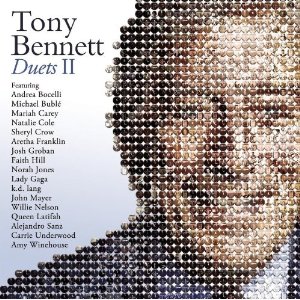 Bennett's voice and jazz stylings are still strong and pleasant, despite his age.  Yet, when paired with younger artists at the top of their game like Buble and Groban, Bennett's voice sounds a bit thin.   The duets on the album offer fresh interpretations of American classics.  In duet form, Bennett trades licks with  his fellow vocalists, followed by exciting harmonizations on choruses.

The most moving track on the album is the duet with Amy Winehouse on "Body and Soul."  Sadly,  this was Winehouse's last recording before her untimely passing in July.   Winehouse's voice is huge, and the harmonies thrilling as her sultry voice takes the lower notes on the thrilling harmonizations.  Goosebumps!

Other standout tracks include:

The Lady is a Tramp - w/ Lady Gaga (Lady Gaga would make a wonderful cabaret singer, and her talent cannot be underestimated!)
Don't Get Around Much Anymore - w/ Michael Buble
Who Can I Turn To (When Nobody Loves Me) - w/ Queen Latifah
Speak Low - w/Norah Jones
This is All I Ask - w/ Josh Groban
One For My Baby (and One More for the Road) - w/ John Mayer

While many of these songs would be disqualified from a wedding playlist based on their bittersweet lyrics, the entire album would be fabulous for a dinner party or romantic evening at home with somebody special.  We love Tony Bennett and Duets II!

Three key Bennett tracks for a wedding include:

To view the full tracklisting or purchase the album on Amazon, click here. To read Ambient DJs' tribute to Amy Winehouse, click here.
Posted by Gregg_AmbientDJ at 9:10 PM