I have long been fascinated with the Philadelphia electronica scene and its talented artist pool including names like Josh Wink, King Britt and Nigel Richards.  I first became exposed to a talented Philadelphia artist of the spoken word, Ursula Rucker, in 2004 when listening to a smooth house track by Josh Wink called "Sixth Sense" off the album "The Ovum Fall Collection."  Not only did this track feature an ultra-cool vibraphone, it had Ursula Rucker delivering poetic lines over the house beats, and I loved it! 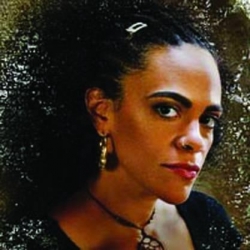 Born and raised in Philadelphia, Rucker wrote poetry through her adolescence, but did not make her public debut until 1994. According to Wikipedia, "Rucker garnered a reputation for unique poetry techniques and stage presence which were described as "strong, vulnerable, wounded and raging". King Britt gave Rucker recognition and invited her to create her first spoken word recording, the 1994 club hit, "Supernatural". Dance music fans and DJ's quickly appreciated Rucker’s vocals and rhythm, which was described as "mystical.""


Rucker went on to collaborate with numerous recording artists and producers, most notably, The Roots.   While I am not a huge poetry fan, I have always enjoyed Rucker's performances, particularly when delivered over the perfect electronic backdrop.  This past week I have been enjoying a collection of her greatest hits covering a variety of styles and themes including love, hate, hypocrisy, politics, AIDS, secrets, erotica and humanity's darkest side (Song for Billy).  I look forward to catching a live performance of Miss Rucker sometime in the not too distant future!

To preview and purchase the works of Ursula Rucker, visit this link on the iTunes music store http://ax.itunes.apple.com/us/artist/ursula-rucker/id2933411

Posted by Gregg_AmbientDJ at 4:20 PM