On August 21, 2010, I had the pleasure of providing DJ services to Patrice and Andrew. The ceremony, cocktail hour and reception party were held at the Breton Woods facility in Brick, with beautiful water views. The weather was comfortable and breezy in the afternoon, perfect for a wedding ceremony.

This was a second marriage for both the bride and groom. Their vision was for an intimate, romantic, and casual gathering among family and close friends. There were approximately 75 guests in attendance who enjoyed cocktails and cigars on the balcony, before later settling inside to dine on a delicious spread that included enormous lobsters. In lieu of giveaways, the couple opted to make a donation to Petfinder.com, an organization dedicated to animal welfare and pet adoption. Guests were provided petfinder.com magnets and additional literature.
After dinner, Ronnie Grieco (saxophonist) and Chelsea Palermo (vocalist) performed outdoors. Ronnie is a seasoned musician, formerly with Joey Dee and the Starliters. Chelsea (www.chelseapalermo.com) is a talented and upcoming jazz singer. The duo's past performances include the Trump Taj Mahal, Mohegan Sun and Madison Square Garden. Chelsea and Ronnie put on a thoroughly enjoyable performance for about 45 minutes, playing songs specifically requested by Patrice and Andrew. Among my favorites were "Peel Me a Grape" and "Just the Two of Us." I would highly recommend Ronnie and Chelsea to wedding couples seeking a unique and memorable cocktail hour. In addition to being great musicians, Ronnie and Chelsea are great people.
After the band, I began my DJ set, starting with a disco groove, before moving on to some mainstream dance music being requested by the younger guests. After building up the dancefloor into a frenzy, I slowed things down with Michael Buble's "Just Haven't Met You Yet" for all of the unmarried females. Instead of tossing her bouquet, Pat danced with each bachelorette and then gave them a flower - very unique! For cakecutting, Marcy Playground's "Sex and Candy" was used at the request of the groom.
The wind dissipated in the later hours, and the humidity factor increased. The music mix featured a combination of classic wedding ballads and upbeat dance music. The second to last song of the evening was "My One and Only Love" sung by Frank Sinatra, a favorite of the Pat and Andrew's. The closing song was Harry Belafonte's "Banana Boat Song."
Overall, this was a highly memorable event - great people, delicious food, good music and some unique touches. Congratulation to the new Mr. and Mrs. Murray!
Key tracks: That's Amore (Dean Martin), More Today Than Yesterday (Spiral Starecase), Everything (Michael Buble), My One and Only Love (Frank Sinatra), Hips Don't Lie (DJ Niso International RMX), I Put a Spell on You (Queen Latifah). 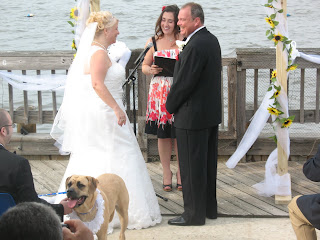 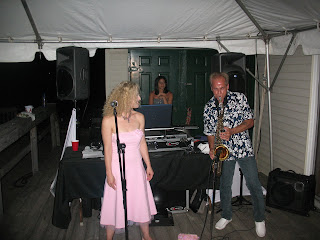 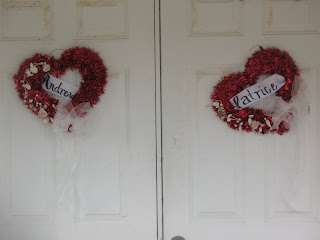 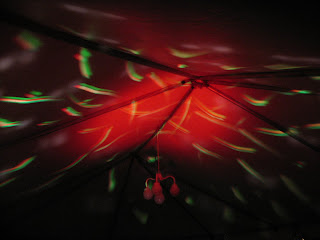 Posted by Gregg_AmbientDJ at 4:31 PM