The Evolution of a DJ

I will turn 40 years old this June.  Unlike many, I didn't DJ a party until my late twenties.  Despite being a late bloomer in the DJ world, I was disposed towards music from an early age.  The few vinyl records and cassettes that I was able to secure during elementary school were played into the ground.  These early albums spanned everything from Joan Jett & the Blackhearts, to Billy Idol, Queen, the Beach Boys and Run D.M.C.  Having some disposable income during the teenage years, I turned my attention towards collecting jazz records, savoring trips to Tower Records in New York City where I would load up on vinyl.
As well as listening to music, I also studied piano, tuba and alto saxophone.  I was a good player and considered a career in music.  I also enjoyed the fast paced world of the stock market, so instead opted to study finance and investments.  During my twenties, I had an amazing job at Merrill Lynch as an investment analyst covering the markets of the Far East.  I traveled frequently to exotic locations such as Japan, China, Indonesia and Vietnam, further broadening my world experiences and musical tastes.  Regrettably, these booming stock markets crashed hard in late 1997, and I was forced to take a more sedate finance job in Princeton.  It was at this time that my interest in music re-emerged in full force.
A good friend of mine, Mike Z. and his architect friends had a passion for throwing house parties with elaborate party environments. I volunteered to DJ at one of these parties.  The experience was utterly enjoyable, from planning the party around a theme, to preparing my "crates" to the amazing adrenaline high of seeing guests going wild for the music.  That was how I caught the "DJ bug"!  I will save the tale of my first forays into the world of weddings for a future blog installment, but suffice it to say, these early parties were magical experiences that I still treasure.  Sure, my equipment and mixing methods may have been crude.  Compensation?  There was none, unless factoring in the free beer.
The first two photos below were taken at a house party in Connecticut, circa 1999.  The last two photos were both taken during the past two years.  While my looks and equipment have changed, the one constant is my passion for performing at parties where the vibe is intense. 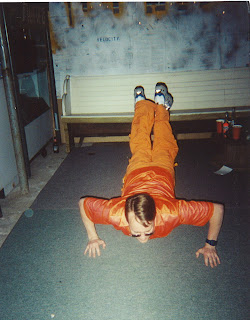 Posted by Gregg_AmbientDJ at 12:33 PM