The MTV Video Music Awards (VMAs) show is typically a highly entertaining production.   With its carnival atmosphere, there is always a level of unpredictability.  What will Lady Gaga wear?  Will Kanye West "act out"? 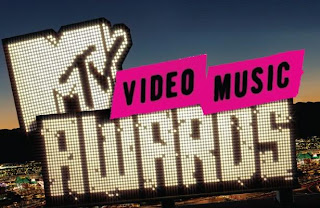 1) Bruno Mar's performance of "Valerie" in the Amy Winehouse tribute.  Mars delivered an upbeat, energetic and moving performance.  Click on this link to see the performance!


2) Video footage of Amy Winehouse's last recording with Tony Bennett of "Body and Soul"- Amy looked and sounded great!  The track will be featured on the September release of Bennett's album "Duets II."
3) Adele's soulful performance of "Someone Like You" in a no-frills performance with just her and a pianist.

4) Beyonce and Jay-Z revealing that they are pregnant!  I have always been impressed by both Jay and Beyonce's longevity and success in the entertainment business.


Lady Gaga's shock value ploy was to cross-dress as a character named "Joe Calderone."  I remained unsettled by her appearance throughout the show!  She looked like a demonic version of Ralph Macchio or perhaps Al Pacino.
My least favorite moment of the show was Tyler the Creator's profanity-laced acceptance speech for "Best New Artist".... his award-winning music video "Yonkers" features Tyler sitting in a chair with a giant cockroach crawling on his hand over a tattoo that says "Kill."  Not a fan!
Below are some of the Award Categories with my picks, followed by the actual winner.  My picks considered both the quality of the song and the music video:

BEST VIDEO OF THE YEAR


"Firework" - Katy Perry was my pick, and also the winner.  This video has an inspirational message, showing a child cancer patient rise above a tough situation like a firework.


Foster the People's "Pumped Up Kicks" was my favorite, but unfortunately the crass Tyler the Creator won for "Yonkers"
BEST FEMALE VIDEO


"Rolling in the Deep" by Adele is an artistic and wonderful song and music video.  Lady Gaga's "Born This Way" took the prize.  While I am a Lady Gaga fan, I'm not so fond of this song, as it sounds like a blatant rip off of Madonna's "Express Yourself."


I would have liked to see Bruno Mars win for "Grenade," but unfortunately Justin Bieber won for "U Smile."  Bieber looked like a skinny version of Sir Elton John!  While I respect Bieber's talent, "U Smile" is a disposable pop song that will never stand the test of time.
BEST HIP HOP VIDEO


My pick was Lupe Fiasco's "The Show Goes On."  Nicki Minaj, an original in her own right, took the prize for "Super Bass."  Super Bass, while a cute pink-themed video, progresses into a soft pornographic film with Minaj clones grinding out lap dances.

The Art of the Video Disc Jockey (VJ)


I currently have a Wednesday night residency at Brewsters Pub in East Windsor (529 Route 130 North, East Windsor), spinning music videos spanning from the 70s to the present.  I am also available to VJ private events - bring your party to life with the additional sensory element of video!  To learn more about our disc jockey services, visit us on the web at http://www.ambientdj.com.
Posted by Gregg_AmbientDJ at 11:28 PM